May 30, 2021
Exciting Update!
Back on 5/10 We posted a "wrap-up" update for the Beaconeer™Lite and informed you that we had moved on to new project.
Actually we revisited an earlier app project begun in 2016 called “TPEP Eclipse 2017 and Beyond”, an Android app with 40 words in English and Spanish, relating to Eclipses and other Astronomical objects.
The goal was to use this app as a “template” for future apps, to encourage A+ English Competency, Bilingual Proficiency, and Civic Engagement.
However, at that time in 2016/2017, there was no cross-platform coding tool, accessible to youth learning, that enabled us to create the iPhone counterpart. All of that changed in 2020 with the availability of Thunkable X.
So, here we are, just three weeks later! Not only did we complete an updated 2024 Android version, to be uploaded soon to Google Play, we have completed the iPhone version also.
We submitted the IOS version GAE2024Beta2 to App Store on 5/28 at 2:35, and by 5:53, the same day, we were approved by App Store for Test Flight beta-testing!!! By comparison, during the entire 2020 Beaconeer™Lite submission process, this rapid response was unheard of!
GAE2024Beta2, upon AppStore approval, will serve as a “template” for so many other apps that will provide endless learning and interning opportunity for youth & young adults. Our success will be a community success!
So, once again we need iPhone Test Flight beta-testers. We need YOU!
And remember, it’s easy-peasy! Just download the Test Flight app to your iPhone.
Then click on this link to test. https://testflight.apple.com/join/iZQ0xpM9
This beta- test is for iPhones only. iPads are not supported.
For this test, youth 10+ can test the app too, once a parent or guardian accepts the EULA!
GAE2024Beta2 is what is referred to as a Minimum Viable Product (MVP). It doesn’t have all the bells and whistles yet. We’ll do that later. We just want to get GAE2024Beta2 on App Store, with as little push back as possible!
So, GAE2024Beta2 contains just the three core features:
· 40 Words, relating to the STEM topic, in English and Spanish (or other languages to be added) with audio pronunciation – relevant to the topic
· Safely View the Total Solar Eclipse – A screen with animation, game, or quiz screen relevant to the topic
· History Makers - relevant to the STEM topic
After testing, please go to this link to complete a short SURVEY https://docs.google.com/.../1FAIpQLSckgP2ZlMF.../viewform...
Thank you Beta-Tester!
Great American Eclipse 4/8/2024 Trajectory Animation. One of the points of totality will occur at Niagara Falls! Dare to prepare to be there!

Great American Eclipse 2024 App for Android/iPhone
F. Avery, co-developer
P. Kelly, co-developer
P.S. We definitely haven't "thrown in the towel" on Beaconeer™Lite for iPhone. It's an important personal safety communications app. We will revisit Appstore submission once the iPhone 8 issue is resolved. For full details see our 5/10 blogpost https://beaconeerus.blogspot.com/2021/05/5102021-update-on-beta-testing.html

We are pleased to announce that our Great American Eclipse 2024 App (GAE2024) is now available in  Apple App Store and Google Play Store!   under the GAE2024 icon.   ·           GAE2024 represents the 1 st  in an exciting series of mobile learning apps under the brand names TPEP™ and “40 Words for Bright Futures”™ , developed by Perennial Preparedness of North Carolina , in collaboration with Youth Exploration Services. The app contains 40 words relating to eclipses and other astronomical objects, pronounced in English and Spanish, along with information on history makers in space sciences and exploration. The next Great American Eclipse takes place on April 8, 2024.    ·           TPEP™ apps are unique in that the primary app features are fully functional, without the need for internet,  after initial download.  This is done in consideration of youth, in many households, who don’t often have regular access to Internet.   ·           TPEP™ brand apps will contain audio pronu
Read more 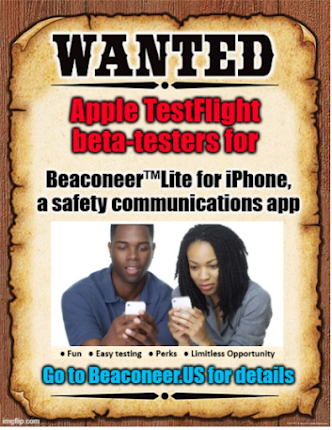 Hi There!  We are seeking volunteer *TestFlight beta-testers, 18 yrs +, to test the GPS functionality of our Beaconeer™Lite app on your iPhone. As the app developers, we want to make sure that the Beaconeer™Lite app will generate reliable Longitude, Latitude, and Vicinity address information, when initiated by the app user. This beta-test is fun and easy-peasy! If you are interested in learning to develop iPhone apps that can make a positive difference and earn revenue, this volunteer opportunity is for YOU!  Learn to test iPhone apps first! Add "iPhone Test Flight Beta-Tester" to your resume! Before you test the Beaconeer™Lite Build Version #202111489, a few facts about GPS and Smartphones: Exact "pin-point" address" GPS accuracy is not guaranteed with most Smartphones. Per GPS.gov , even under the best conditions, typical Smartphone GPS (Latitude, Longitude) may be accurate within a 16 foot radius. Therefore, our claim for the Beaconeer™Lite app is that GP
Read more